Batman has a rich history spanning almost 80 years. Telltale Games has a legacy of telling some of the best stories in the video game industry. Put the two together and what is the end result? In our Batman The Telltale Series Episode One review we delve into that very question. Batman has some of the richest source material to pull from, not only in the comic book industry but in any storytelling medium. What Telltale Games has managed to accomplish is create their own spin on the Batman mythos that has not been told before. Batman is the most dynamic and complex superhero in the comic book genre and Telltale has managed to capture the essence of the character’s struggles to near perfection.

Telltale Games is well known for their ability to craft stories which are both rich and intriguing. With so much material to pull from, we were very curious what route Telltale would take. What they were able to do was incredibly interesting, putting their own stamp on the Batman mythos which does not feel like a copy and paste job from other versions of the Batman story. Familiar characters are abundant in Realm of Shadows, some making subtle appearances and some making very blatant ones. 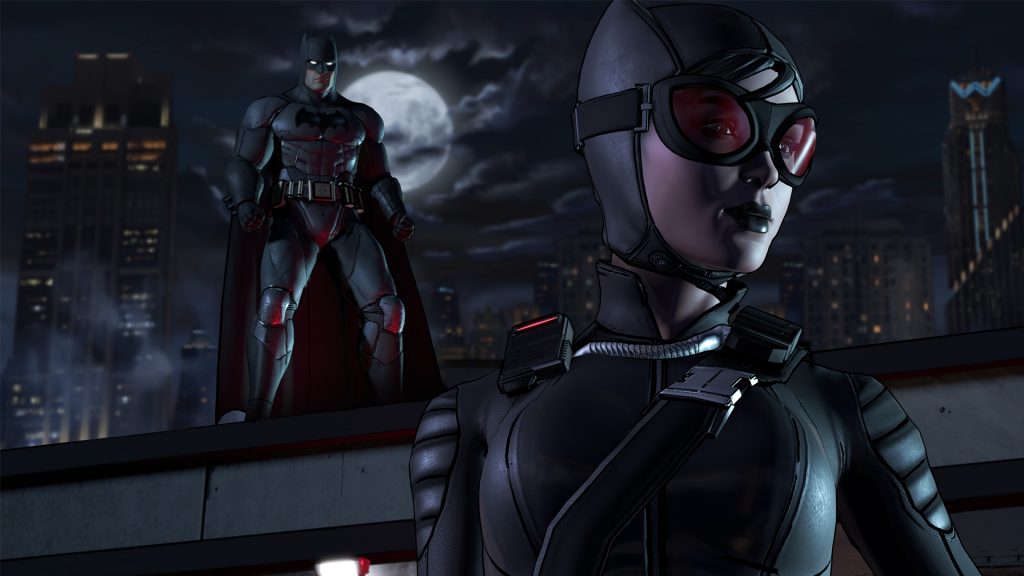 This being said, most are portrayed very differently than we’ve seen in other mediums. Bruce Wayne isn’t the billionaire playboy we’re accustomed to seeing. Harvey Dent doesn’t appear to be the squeaky clean district attorney as portrayed in the most prominent version of the Batman, The Dark Knight Trilogy. In fact, it would have been so easy for Telltale to take material from Christopher Nolan’s version of Batman, but they don’t. This is one of the things that impressed us the most in our Batman The Telltale Series Episode One review. Oswald Cobblepot was Bruce Wayne’s childhood friend. Bruce’s parents may have been dirty. The story focuses on Bruce Wayne and ‘The Batman’ equally, and your choices actually shape who the true mask is: Batman or Bruce Wayne. The story does follow the Batman mythology, but Telltale does it in their own way, with flashbacks and voice overs contrasting Batman and Bruce Wayne’s life.

One thing that Telltale Games strove to accomplish with their iteration of Batman is to maintain a 50/50 balance between the scenes involving Bruce Wayne and the scenes involving Batman. In this respect they were successful. Realm of Shadows not only maintained this balance, but as you make choices as Bruce Wayne, the question becomes who are you actually playing as? Are you making your choices as Bruce Wayne, or are you making choices as Batman? The two are melded together and there is a very unique dichotomy between the two that hasn’t really been explored before (at least that I’ve been exposed to.) Telltale’s games are rich with emotional puzzles which ultimately form the character you are playing as through choices. You can put up a public face as Bruce Wayne, or you can maintain the Bat persona. 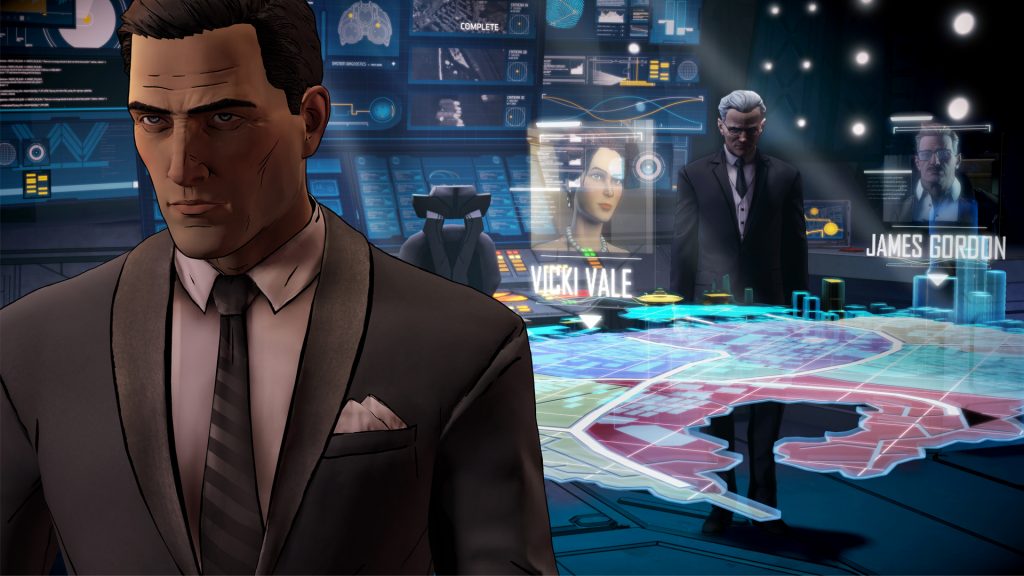 That poses a fundamental question, which I hope Telltale explores further in the future episodes of the series: who is the real mask? Is it Bruce Wayne, or is it Batman? In my playthrough it was definitely Bruce. This was not necessarily on purpose though. Again, Telltale provides some very difficult emotional puzzles and moral dilemmas. This is one of the things that impressed us the most in our Telltale The Batman Series Episode One review. We were placed in various moral quandaries, and we couldn’t turn a blind eye as Bruce Wayne to corruption, although we had the choice to. There are also things you experience as Batman that affect Bruce Wayne. This does not go unnoticed. One key event is when Bruce was scratched by Catwoman. People noticed this. You have to be very careful with both your words and actions so as not to reveal your identity as Batman.

Batman The Telltale Series Episode One Review — Gameplay and Presentation 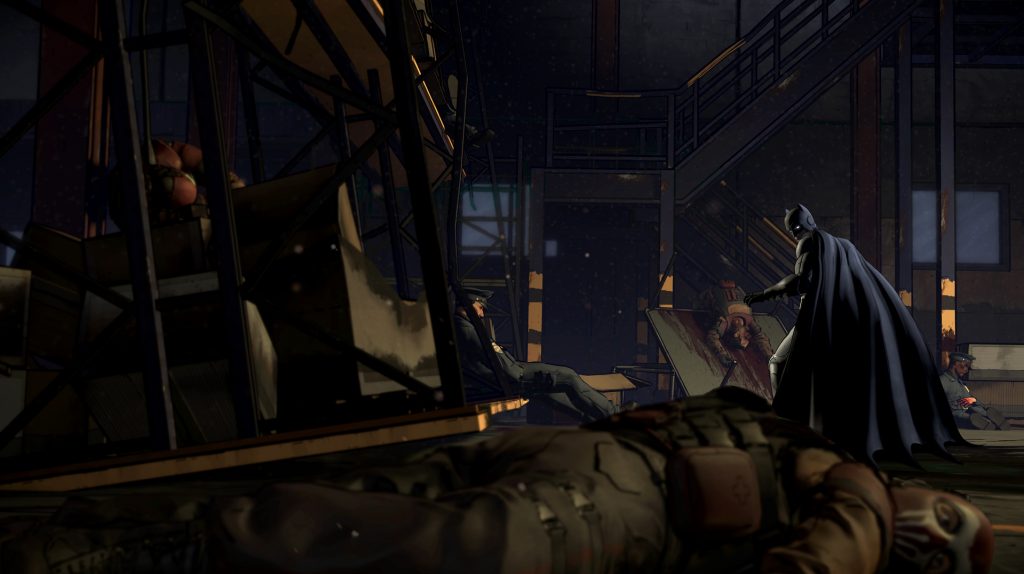 Both the gameplay and presentation in Realm of Shadows is fantastic. Jered-Emerson Johnson’s score is masterful, the storytelling is told in a way which is very unique, and there are aspects of the gameplay which are fresh to Telltale’s usual formula. The combat still maintains the QTE aspect from previous titles, but because of the detective nature of Batman, there are some neat twists. Batman uses his gadgets to piece together crime scenes and is believable as ‘The World’s Greatest Detective.’ This is a really satisfying aspect of the exploration and the environmental interaction in the game which we loved. You also have less time to make difficult decisions. It is forced us to react rather than contemplate, which made for a much more difficult experience than, say, Telltale’s The Walking Dead. We loved this change. While QTE can be frustrating at times with regards to combat, the game really is all about the characters and the choices you make.

Batman The Telltale Series Episode One Review — A Promising Start 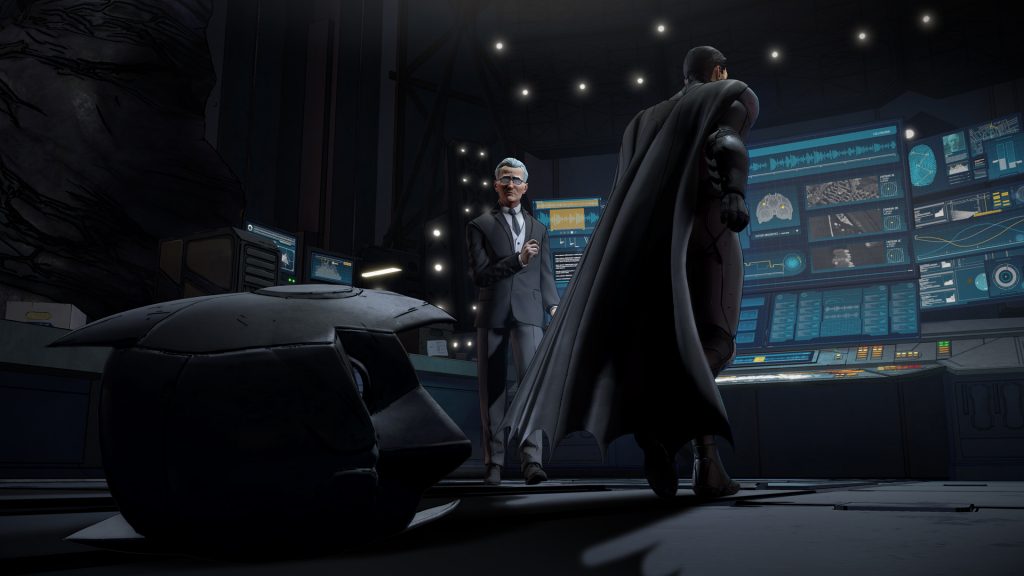 Realm of Shadows was such a unique take on the Batman story. From the difficult choices you have to make, the portrayal of certain classic characters with their own twist, and tweaks to the gameplay, it was masterful. While this is only the first episode in Telltale’s Batman story, we were left thirsting for more, especially with the climactic ending. There were plenty of surprises that we really enjoyed.

If Realm of Shadows is any indication, Telltale may have yet another masterpiece on their hands.

Thanks goes to Telltale Games for providing Video Game Culture HQ with a copy of the title for our Batman The Telltale Series Episode One review.

Batman The Telltale Series Episode One Review: Realm of Shadows
Telltale Games has managed to craft a masterful incarnation of the Batman mythos in their first episode of Batman: The Telltale Series. It is both familiar yet new. Bruce Wayne is one of the most complex superheroes in the genre and Telltale explores the dichotomy between Bruce and 'The Bat' in a way that hasn't been done before.
Overall Score9.5
Pros
Cons
2016-08-02
9.5Overall Score
Reader Rating: (1 Vote)
9.7