The Legend of Zelda: Breath of the Wild was by far the most anticipated game to appear at E3 2016. We had the chance to go hands-on with the title for our Breath of the Wild preview, and it did not disappoint. Adding something new yet at the same time maintaining the classic Zelda feel, Breath of the Wild is the “breath” of fresh air that the series so desperately needed. It changes up the mechanics of the classic Zelda experience yet maintains some familiarity. It also has an absolutely gorgeous open world, which we got to explore a portion of. The demo was split into two separate parts. The first portion featured pure exploration in an area called The Great Plateau filled with enemies and a number of different secrets that were housed. The second portion of the Breath of the Wild demo was presumably the opening of the game, dealing with the story and an introduction to the backdrop of the world.

Breath of the Wild Preview — Gameplay

One of the most surprising and refreshing aspects of The Legend of Zelda: Breath of the Wild is that it completely changes up the classic Zelda control scheme. Zelda has essentially stuck with the same basic control layout since the series transitioned to 3D in Ocarina of Time, but Breath of the Wild takes this and turns it on its head. It did take quite a bit of getting used to. Y is now used to attack rather than the traditional B button. The stamina meter returns from Skyward Sword and you can now dash for a limited time by holding down the B button. X is actually used to jump, and using that in conjunction with the L stick allows you to climb massive cliffs. The right trigger button is used to fire your bow and arrow, while the left trigger button is still used to for L targeting and to use your shield. A is your action button, but is mostly used to pick up weapons that you gain from defeating enemies or items you find in the vastness of Breath of the Wild’s incarnation of Hyrule Field. We also found during our Breath of the Wild preview that the game actually does take some cues from The Wind Waker. For instance, you can pick up your enemy’s weapons and use them for combat, although weapons have a durability factor and can break if used too often. One thing that is really cool is you can actually throw a weapon at an enemy using the right shoulder button just like in The Wind Waker. 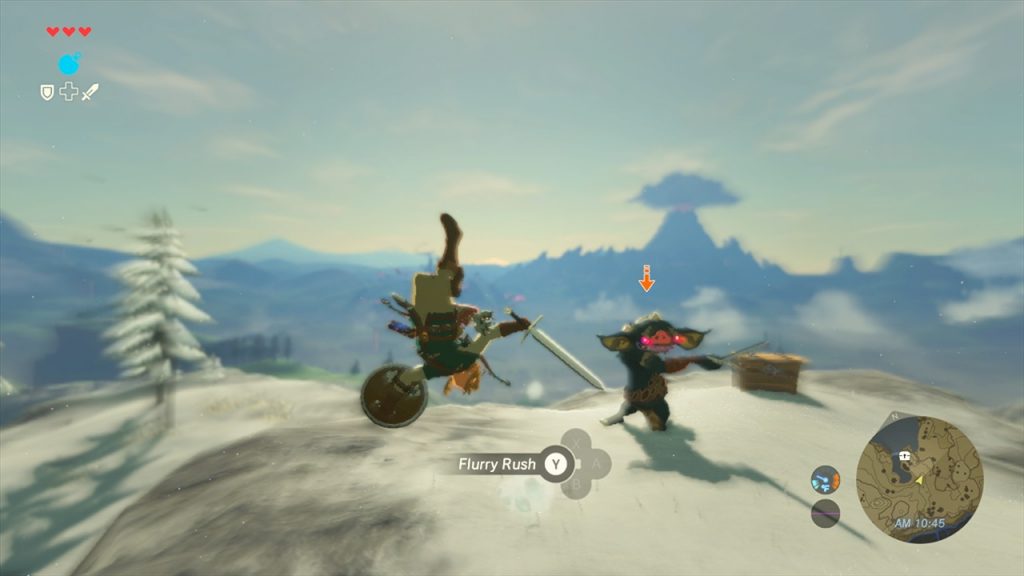 By evading an enemy’s attack, you can enter into this slow motion-type state and devastate a foe. Slow motion can also be initiated by jumping off of a high ledge and pulling out your bow and arrow. Headshots with your bow and arrow will also inflict a damage bonus on enemies compared to normal attacks. Stealth, again returning from The Wind Waker, gives you a bit of variety on how you approach combat. There is a meter at the bottom of your HUD that measures Link’s sound, so as he crouches and sneaks up on enemies or wild animals, you can see how loud Link is compared to his environment, ensuring Link doesn’t alert enemies to his presence. This is also the first Zelda game where hearts are not present and do not replenish health. Instead, Link can either consume food, such as steak, or simply cook up a meal. Breath of the Wild features a full day and night cycle, with one minute of gameplay time equating to one hour in the game, the first Zelda game to feature such a cycle since Twilight Princess.

Breath of the Wild Preview — The World

Although we only got a glimpse of Hyrule in our Breath of the Wild preview, it is absolutely massive. Said to be 12 times larger than the world in Twilight Princess, it promises to be the open-world Zelda game that fans have been craving. It actually reminds me a lot of Xenoblade Chronicles X, and Breath of the Wild even has a number of developers from Monolith Soft working on it. The area that we got to explore in our Breath of the Wild preview was known as the Great Plateau, and even this area seemed massive in scale considering it was just one portion. The world is simply beautiful. There was so much to explore and we only scratched the surface, but we were able to fight enemies, find a few a secrets with a few chests, and there was even a miniboss which you could encounter during the demo. 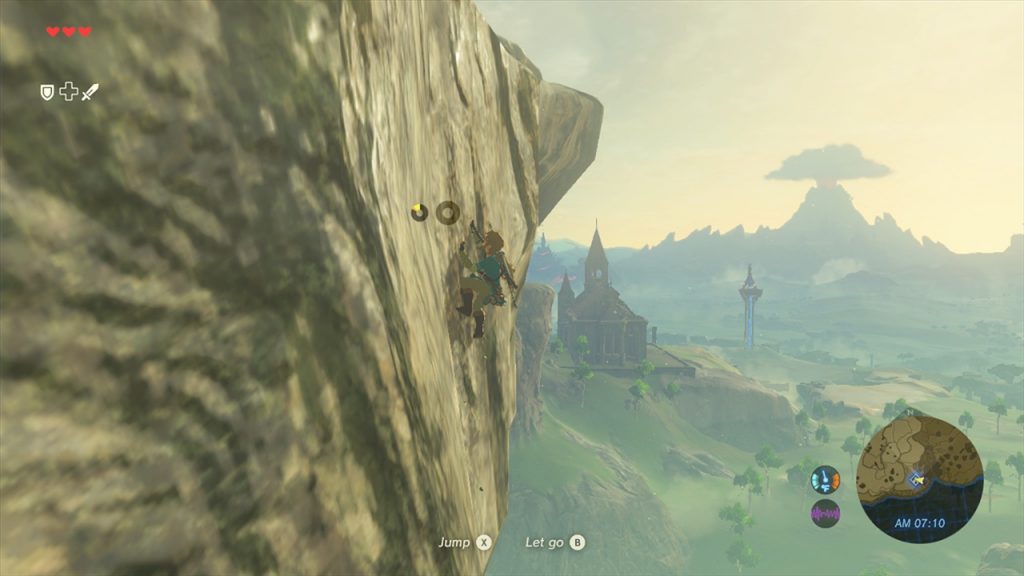 Climbing up cliffs and simply taking in the scenery was probably the most satisfying experience during our Breath of the Wild experience. The music was so relaxing, and while is wasn’t iconic per se, that didn’t really matter to us; it fit the atmosphere perfectly. There were things that we weren’t able to get to during our Breath of the Wild preview, but temperature plays a huge part throughout the kingdom that was once known as Hyrule. Link can change attire based on the weather in order to survive. For instance, if it’s snowing/freezing, Link can slip into something warmer in order to continue on his journey. There is simply so much to take in and there was so little time, but Breath of the Wild is a great change of pace for the series and the overworld is breathtaking.

Breath of the Wild Preview — Story

As we previously mentioned, the Breath of the Wild demo was split into two parts: exploration and a story portion. The story portion is actually what intrigued us the most. Link wakes up in a sarcophagus-like structure to a voice, presumably Princess Zelda’s, explaining some of the narrative. Link has slumbered for 100 years and Hyrule has fallen into ruin. Awakening in the Chamber of Resurrection, there are Sheikah symbols everywhere, which hopefully connects the game to Ocarina of Time. In the Chamber of Resurrection you also obtain a key item: the Sheikah Slate. It is not yet clear what this item is or how it relates to Link, but it is key during this portion of the demo. Once Link finds some clothes and leaves the Chamber of Resurrection, he stumbles upon an old man who who tells him that “Calamity Ganon” has ravaged Hyrule Castle for the past 100 years and is nearing the peak of his power. If Calamity Ganon is not stopped, the world as we know it will be destroyed, and once again it is Link’s quest to save the world. This is the most terrifying incarnation of Ganon yet and it will be interesting to see the exact role he will play in the game and what his dynamic with Link is considering their history in previous games. 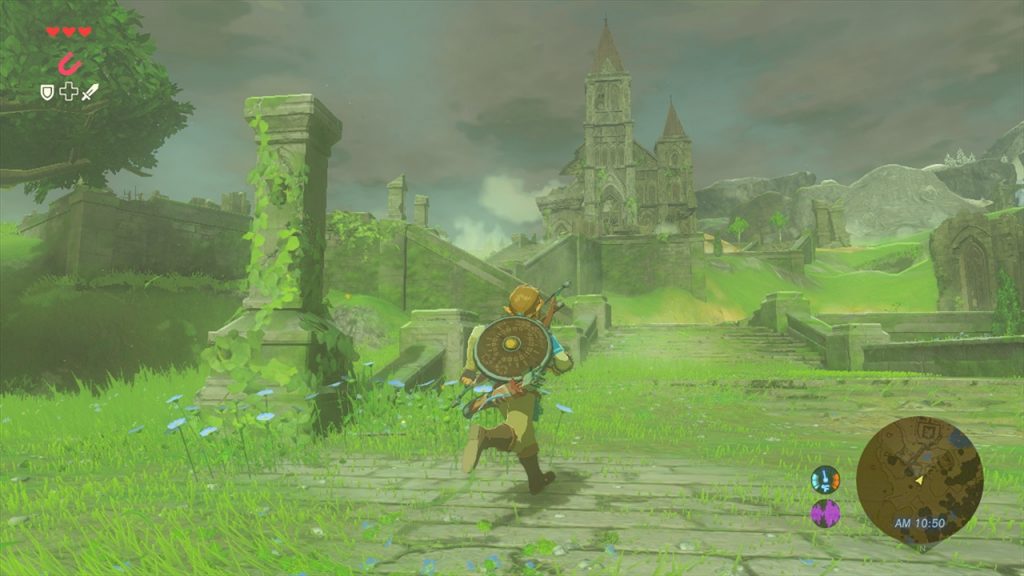 One of most nostalgic, and for me the most emotional part of this demo was entering the now decrepit Temple of Time. While this is another connection to Ocarina of Time, it brought back so many memories and actually gave me a tear or two both out of catharsis and excitement. Eventually Link reaches one of the many Sheikah structures in the game, and using the Sheikah Slate he unlocks Sheikah Shrines all across Hyrule. These are possibly mini dungeons of some sort and they obviously have great significance in the game, but it’s not clear what their exact purpose is. Once you return to the old man, who is quite mysterious and seems to know a lot more than he lets on, he tells you that you must go to Hyrule Castle, but it’s unreachable due to a chasm. You can only reach it by paraglider, and the man offers you his, but only in exchange for a treasure, which is in one of the Sheikah Shrines close by. Once reaching the shrine, our demo ended for our Breath of the Wild Preview.

Breath of the Wild Preview — An Experience to Remember 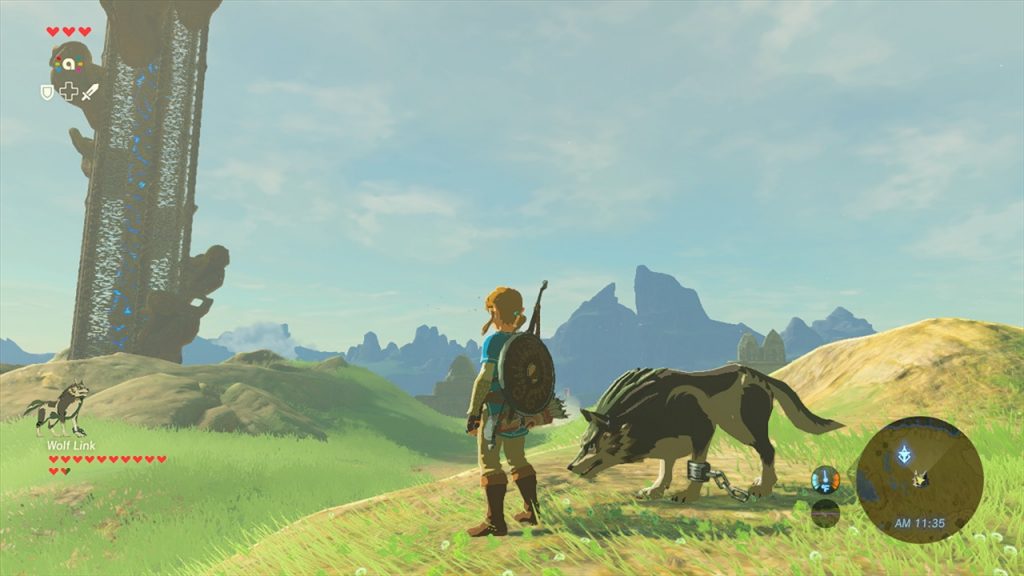 The Legend of Zelda: Breath of the Wild demo was a special, unforgettable experience. 40 minutes was not enough time to scratch the surface of the game, but there is a reason why many outlets, including this one, is naming it the best game of E3 2016. The graphical style, the gorgeous open world, the music, the combat — there’s simply too much to list that impresses. By focusing on one game this E3 Nintendo allowed us to be completely immersed in the experience and we were blown away. This may be the Zelda game to finally dethrone Ocarina of Time, which is still heralded as the greatest Zelda game of all time. While we wish that we had more time with Breath of the Wild, early next year is not too far away and we are sure that it will be an experience of a lifetime.